Computer Organization and Design 笔记 - Storage and Other I/O Topics 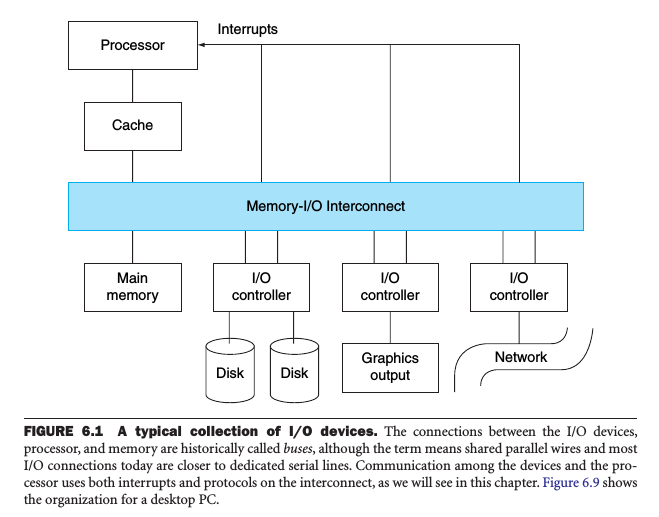 Dependability is the quality of delivered service such that reliance can justifiably be placed on this service.

Reliability is a measure of the continuous service accomplishment(or, equivalently, of the time to failure) from a reference point.

mean time to failure(MTTF) is a reliability measure. annual failure rate(AFR) is the percentage of devices that would be expected to fail in a year for a given MTTF. Service interruption is measured as mean time to repair(MTTR). Mean time between failures(MTBF) is simply the sum of MTTF and MTTR.

Storage device where data retins its value even when power is removed.

One of thousands of concentric circles that makes up the surface of a magnetic disk.

One of the segments that make up a track on a magnetic disk; a sector is the smallest amount of information that is read or written on a disk.

Cylinder referes to all the tracks under the heads at a given point on all surfaces.

The time for the process of positioning a read/write head over the proper track on a disk.

Also called rotational delay , the time required for the desired sector of a disk to rotate under the read/write head; usually assumed to be half the rotation time.

Transfer time is the time to transfer a block of bits.

NOR flash : storage cell is similiar to a standard NOR gate. Typically used for BIOS memory.

NAND flash : offers greater storage density, but memory could only be read and written in blocks as wiring needed for random accesses was removed. Typically used for USB key.

To cope with bit wearing out, most NAND flash products include a controller to spread the writes by remaapping blocks that have been written many times to less trodden blocks.

A bus that connects processor and memory and that is short, generally high speed, and matched to the memory system so as to maximize memory-processor bandwidth.

A bus that is designed to allow processors, memory, and I/O devices to coexist on a single bus.

I/O buses donot typically interface directly to the memoty but use either a processor-memory or a backplane bus to connect to memory.

A sequence of operations over the interconnect that includes a request and may include a response, either of which may caryy data. A transaction is initiated by a single request and may take many individual bus operations.

A bus that includes a clock in the control lines and a fixed protocol for communicating that is relative to the clock.

Uses a handshaking protocol for coordinating usage rather than a clock; can accommodate a wide variety of devices of differing speeds.

A series of steps used to coordinate asynchronous bus transfers in which the sender and receiver proceed to the next step only when both parties agree that the current step has been completed.

The I/O Interconnects of the x86 Processors

The chip for memory controller hub next to the processor.

The one connected to north bridge, witch is the I/O controller hub. 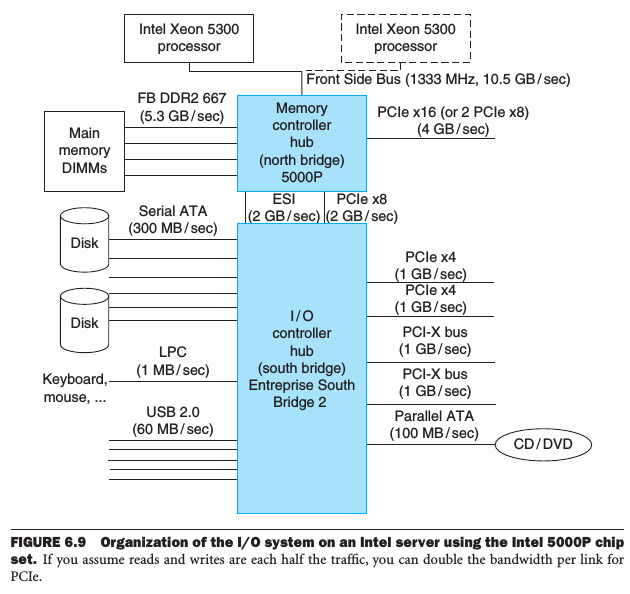 Interfacing I/O Devices to the Processor, Memory, and Operating System

An I/O scheme in which portions of address space are assigned to I/O devices, and reads and writes to those addresses are interpreted as commands to the I/O device.

Communicating with the Processor

Transferring the Data between a Device and Memory

A type of application that involves handing small short operations(called transactions) that typically require both I/O and computation. Transaction processing applications typically have both response time requirements and throughput performance.

Performance measure of I/Os per unit time, such as reads per second.

Performance measure of bytes per unit time, such as GB/sec.

An organization of disks that uses an array of small and inexpensive disks so as to increase both performance and reliability.

RAID 2 borrows an error detection and correction scheme most often used for memories.

protection group is the group of data disks or blocks that share a common check disk or block. The cost of higher availability can be reduced to 1/n, where n is the number of disks in a protection group.

The parity is stored as blocks and associated with a set of data blocks.

To fix the parity-write bottleneck, the parity information can be spread throughout all the disks so that there is no single bottleneck for writes.

When a single failure correction is not sufficient, parity can be generalized to have a second calculation over the data and another check disk of information. The second check block allows recovery from a second failure.

MTTF is calculated by putting thousands of disks in a room, run them for a few months, and count the number that fail.

The annual failure rate (AFR) is a more useful measure.

Fallacy: A GB/sec interconnect can transfer 1 GB of data in 1 second.

OSs are the best place to schedule disk accesses.

Since the disk knows the actual mapping of the logical addresses onto a physical geometry of sectors, tracks, and surfaes, it can reduce the rotational and seek latencies by rescheduling.

Pitfall: Using the peak transfer rate of a portion of the I/O system to make performance projections or performance comparisons.

The peak performance is based on unrealistic assumptions about the system or are unattainble because of other system limitations.