A structrue that uses multiple levels of memories; as the distance from the processor increases, the size of the memories and the access time both increase.

The main memory is implemented from DRAM, levels closer to the processor use SRAM, the largest and slowest level is usually magnetic disk.

The Basics of Caches

A cache structure in which each memory location is mapped to exactly one location in the cache.

A valid bit is used to indicate whether an entry contains a valid address. Tag contains the address information required to identify whether the associated block in the hierarchy corresponds to a requested word. 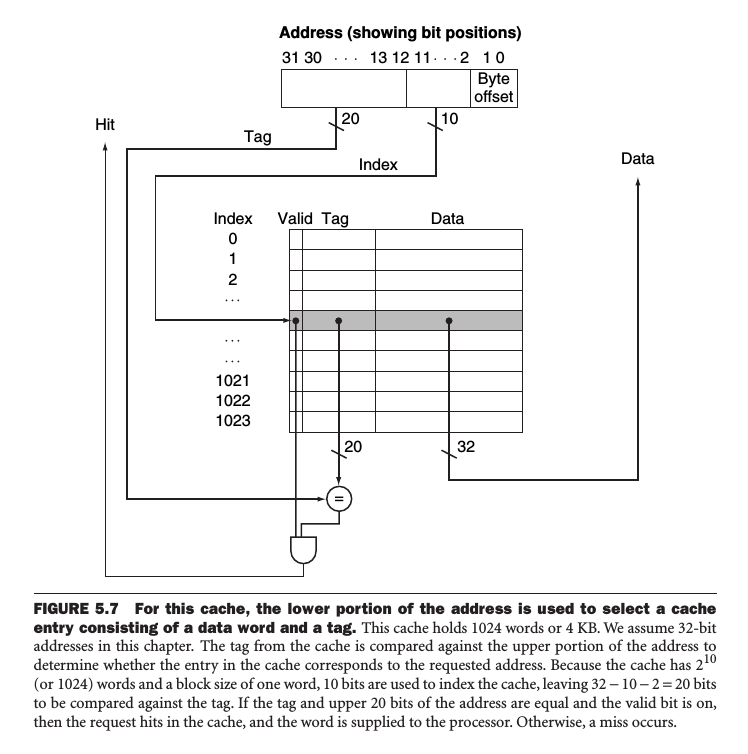 Larger blocks exploit spatial locality to lower miss rate, while miss rate may go up eventually if the block size becomes a significant fraction to the cache size, because:

early restart : Uppon miss, resume execution as soon as the requested word of the block is returned, rather than wait for the entire block.

Cache Miss : A request for data from the cache that cannot be filled because the data is not present in the cache.

Out-of-order processors can allow execution of instructions while waiting for a cache miss, In-order-processors stall on a cache miss.

Always write the data in to both the memory and the cache.

A queue that holds data while the data is waiting to be written to memory. It's used for fewer memory access and higher performance.

When write occurs, the new value is written only in the cache, the modified block is written to the lower level of the hierarchy when it's replaced.

A scheme in which a level of the memory hierarchy is composed of two independent caches that operate in parallel with each other, with one handling instructions and one handling data.

A combined cache with a total size equal to the sum of the two split caches will usually have a better hit rate.

A cache structure in which a block can be placed in any location in the cache.

A cache that has a fixed number of locations where each block can be placed.

A replacement scheme in which the block replaced is the one that has been unused for the longest time. 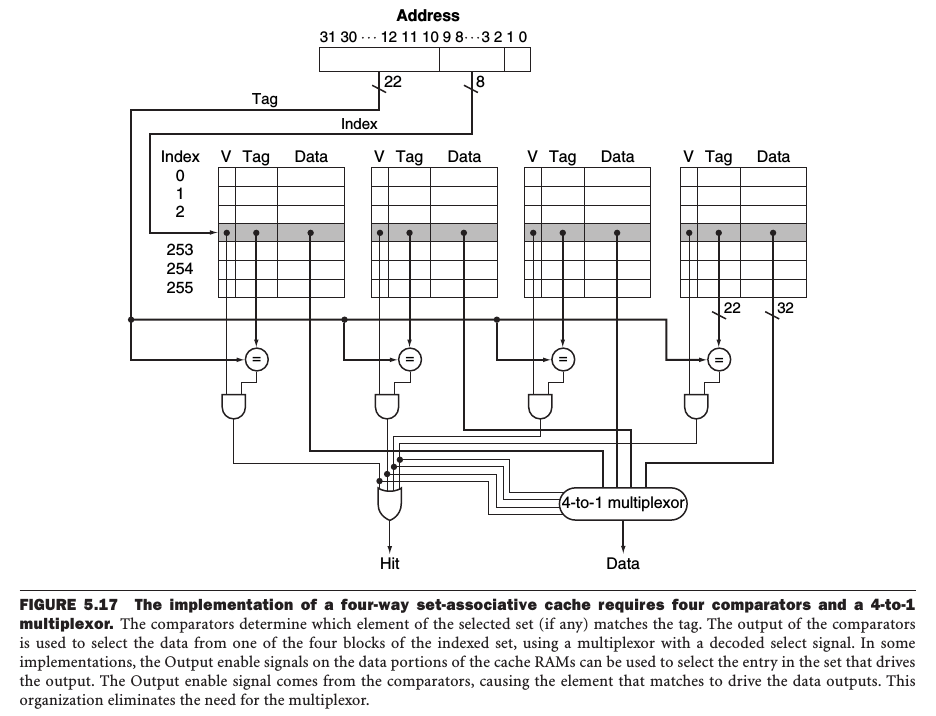 The design for a primary and secondary cache are significantly different:

The fraction of references to one level of a cache that miss; used in multilevel hierarchies.

autotuning : Considering block size and number of caches, some numerical libraries parameterize their algorithms and then search the parameter space at runtime to find the best combination for a particular computer.

virtual Memory implements the translation of a program's address space to physical addresses.

Also called address mapping, the process by which a virtual address is mapped to an address used to access memory.

segmentation : A variable-size address mapping scheme in which an address consists of 2 parts: a segment number, which is mapped to a physical address, and a segment offset. 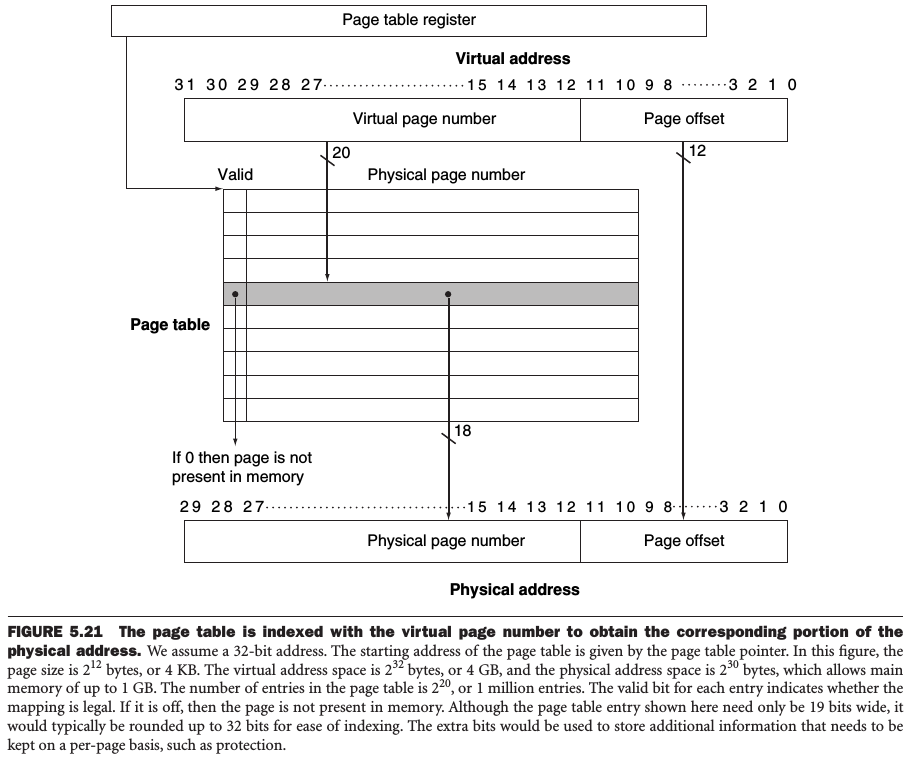 Also called use bit, which is set whenever a page is accessed. A simple inplementation for LRU(least recently used).

Dirty bit is set when any word in a page is written, which indicates whether the page needs to be written out before it's memory can be given to another page.

A modified page is often called a dirty page.

A cache that keeps track of recently used address mappings to try to avoid an access to the page table, which makes addressing translation fast.

The hardware maintains an index that indicates the recommended entry to replace, thich is chosen randomly considering the complexity for hardware. 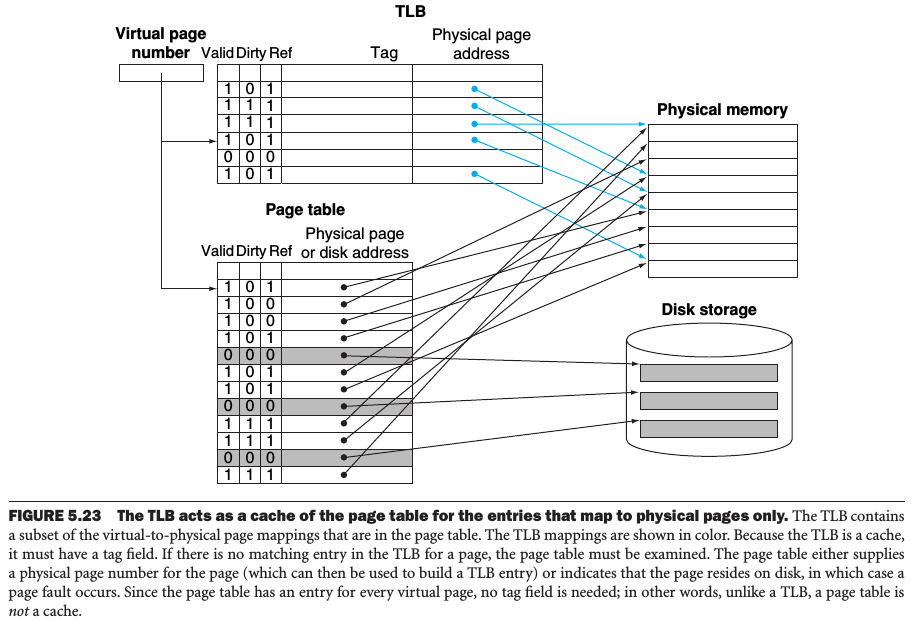 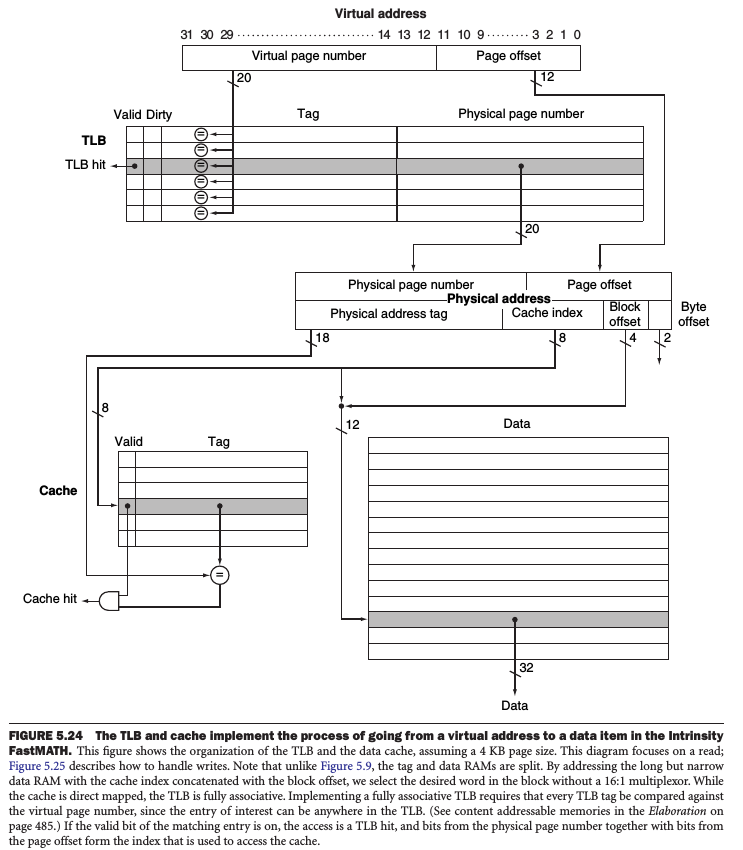 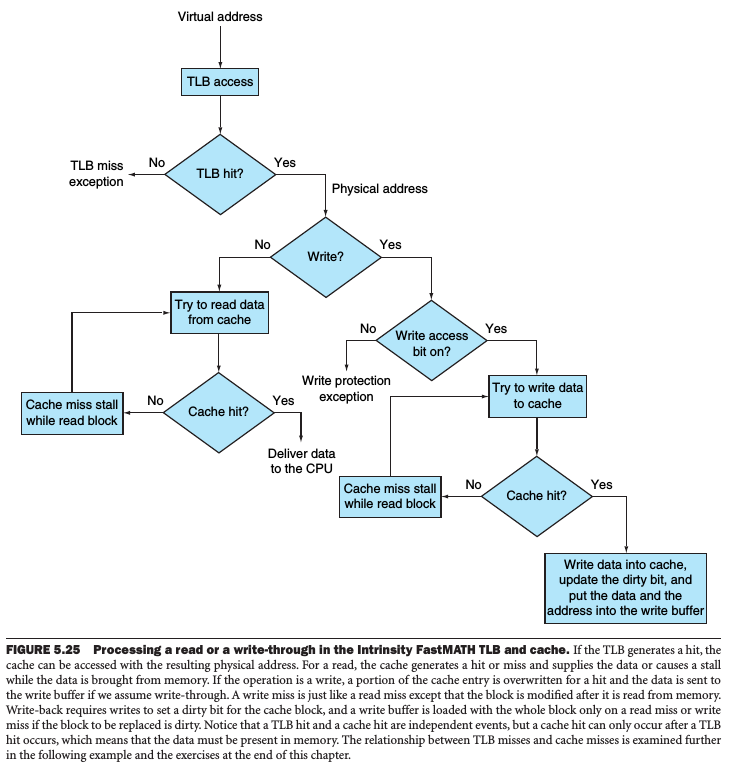 A cache that is accessed with a virtual address rather than a physical address.

Aliasing occurs when there are two virtual addresses for the same page. This ambiguity would allow one program to write the data without the other program being aware that the data had changed.

The hardware must provide at least 3 basic capabilities:

Sharing information across processes: the operating system modifies the page table of the accessing process, the write access bit can be used to restrict the sharing to just read.

All misses are classified into one of the 3 categories:

Upon page fault, the OS complete:

Since TLB miss is much more frequent, the OS loads the TLB from the page table without examine the entry and restarts the instruction. If the entry is invalid, another exception occurs and the OS recognizes the page fault.

When an exception first occurs, the processor sets a bit that disables all other exceptions.

A portion of the address space that cannot have page faults.

Continuously swapping pages between memory and disk is called thrashing, the set of popular pages is called working set.

A tech in which data blocks needed in the future are brought into the cache early by the use of special instructions that specify the address of the block.

Pitfall: Forgeting to account for byte addressing or the cache block size in simulating a cache.

If the processor continues to execute instructions, and may even sustain more cache misses during a cache miss.

This would cause addressing problems.