Scheduling is simpler in personal computers because (1) there is only one active process, (2) CPU is more faster than I/O.

When new process enterd, its executime is compared with the remaining time of current process.

Each process is assigned a time interval, called its quantum , during which it is allowed to run. The CPU switches when the process blocks, of course.

Setting the quantum too short causes too many process switches and lowers the CPU efficiency, but setting it too long may cause poor response to short interactive requests. A quantum arount 20-50 msec is often a resnable compromise.

Each process is assigned a priority, and the runable process with the highest priority is allowed to run. The priority of the running process decreases at each clock tick.

A simple algorithm for giving a good service to I/O bound processes is to set the priority to 1/f, where f is the fraction of the last quantum that a process used.

Set up priority classes, a group of processes sorted by priority in each class.

Whenever a process used up all the quanta allocted to it, it was moved down one class, saving the CPU for short, interactive processes.

Whenever a carriage return was typed at a terminal, the process belonging to that terminal was moved to the highest priority class.

This prevents a process that needed to run for a long time when it first started but became interactive later, from being punished forever.

To a certain extent, it would be nice if this algorithm used in batch systems could be used for interactive processes.

Make real promises to the users about performance ahd then live up to those promises.

Give processes lottery tickets for various system resources. Whenever a scheduling decision has to be made, a lottery ticket is chosen at random, and the process holding that ticket gets the resource.

Each user is allocated some fraction of the CPU and the scheduler picks processes in such a way to enforce it.

If user 1 is entitled to twice as much CPU time as user 2, the sequence should be:

Depending on how much time each event requires for processing, it may not even be possible to handle them all. A real-time system that meets this requirement is said to be schedulable . 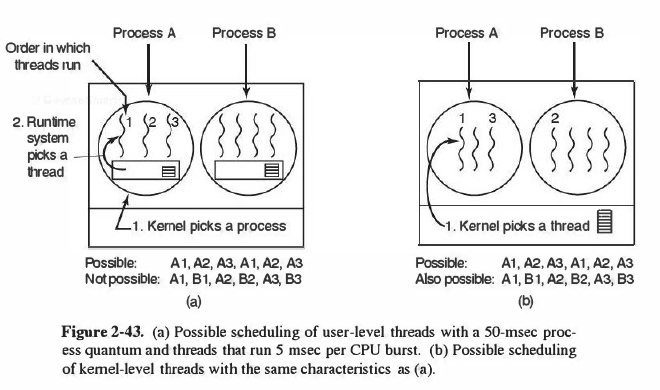